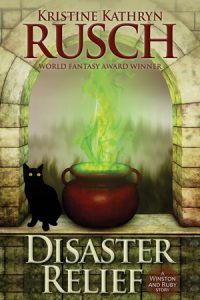 Our long time readers probably remember that Mama got to have a guest post by Kristine Kathryn Rusch on our blog a number of years ago. She was so happy and jumping around about this. Kris has long been one of Mama’s favorite authors.

At any rate, we are thrilled to have “Disaster Relief”, a Winston and Ruby story, in the Fantastic Feline Heroes Bundle.

What’s it about, you ask? Well let me tell you.

Ruby had the idea—help the magic users in New Orleans survive Hurricane Katrina. Pretty charitable for a tiny cat. Winston thought he knew why. The Southeast Asia tsunami scared her, made her realize her home on the Oregon Coast was vulnerable to natural disaster, too.

But when her offer of help turns into a rescue, Ruby watches helplessly as other familiars move into her little house. And Winston expects her to rebel, because she is, after all, a cat…

At any rate, the accolades for Kristine Kathryn Rusch are long. She has some other great cat stories. You’ll find some in Five Feline Fancies. One of her more recent books, under her Kris Nelscott pen name is The Protectors. It’s set in the same era as the Smokey Dalton series (which Mama highly recommends).

New York Times bestselling author Kristine Kathryn Rusch writes in almost every genre. Generally, she uses her real name (Rusch) for most of her writing. Under that name, she publishes bestselling science fiction and fantasy, award-winning mysteries, acclaimed mainstream fiction, controversial nonfiction, and the occasional romance. Her novels have made bestseller lists around the world and her short fiction has appeared in eighteen best of the year collections. She has won more than twenty-five awards for her fiction, including the Hugo, Le Prix Imaginales, the Asimov’sReaders Choice award, and the Ellery Queen Mystery Magazine Readers Choice Award.

Publications from The Chicago Tribune to Booklist have included her Kris Nelscott mystery novels in their top-ten-best mystery novels of the year. The Nelscott books have received nominations for almost every award in the mystery field, including the best novel Edgar Award, and the Shamus Award.

She also edits. Beginning with work at the innovative publishing company, Pulphouse, followed by her award-winning tenure at The Magazine of Fantasy & Science Fiction, she took fifteen years off before returning to editing with the original anthology series Fiction River, published by WMG Publishing. She acts as series editor with her husband, writer Dean Wesley Smith, and edits some of the volumes, as well.

To keep up with everything she does, go to kriswrites.com and sign up for her newsletter. To track her many pen names and series, see their individual websites (krisnelscott.com, kristinegrayson.com, retrievalartist.com, divingintothewreck.com). She lives and occasionally sleeps in Oregon.

And she and her husband have cats. You’ll meet them soon!