Hide Search
You are here: Home / The Latest With Chey / Author Jamie Ferguson 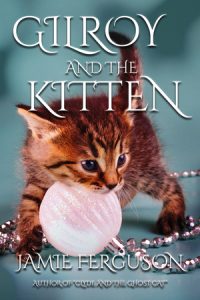 Mama knows Jamie because she met her at a writing conference. Now Jamie is the one who does most of the bundles and she helped us a lot in getting the bundle going. She’s great. She also writes great stories.

The story she has for this heroic feline bundle is “Gilroy and the Kitten.”

This is what it’s about:

Gilroy is looking forward to spending a day alone. He’s planned it out – he’ll lie in the sun and warm his furry belly, he’ll watch birds, and maybe even scratch his claws on the carpet since Breda, his person – who also happens to be a witch – won’t be around to see.

And then Breda’s 8-year-old grandniece Delaney shows up.

Delaney, who is already Gilroy’s least favorite human, not only doesn’t go away, she also manages to trigger a spell that adds an even greater complication to Gilroy’s day.

It’s not the only cat related story Jamie has either! She has a story called Clyde and the Ghost Hunting Cat in the anthology Ghost Hunting Critters. So she definitely writes about cats.

If you ask Jamie about herself as a writer, this is what she says, “I’ve wanted to be a writer for as long as I can remember. We moved around a lot when I was little, so I can easily pin down my age based on where we lived, which means I was maybe six when I first made this proclamation. My writing has changed quite a bit over the years, although I am still proud of the short story I wrote in 8th grade about an orangutan named Inconspicuous (I was quite taken with that word). My writing focuses on characters. I’ve created stories about ghosts, clones, monsters, escape artists, mermaids, circus performers…I’m all over the map. But in every single story I do my utmost to get into the minds and hearts of my characters. I love to put them in awful situations to see how they feel, and how they think. I want them to agonize over their choices, and I want what they choose – or don’t choose – to matter. I want the reader to feel joy when a character succeeds, and to cry when they don’t – just like I do when I’m writing the story. Writing is far more fun and rewarding than any other job I’ve ever had, and I’ve been fortunate to have some good day jobs. None of them have ever had the appeal for me that writing does. My ‘free’ time is spent in a futile quest to wear out my two herding dogs since I haven’t given in and gotten them their own herd of sheep.”

Jamie had a wonderful cat named Spiff, who is no longer with her but you will see more photos of Spiff on another day.