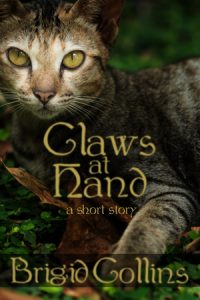 Mama says she is always jealous that Brigid comes from a family of writers. Her mom is an editor and her dad is science fiction author, Ron Collins. Brigid’s family also has cats and often her dad’s feed has his cat. And Brigid’s feed frequently has her cat, Brooke.

Brigid’s story for Fantastic Feline Heroes is “Claws at Hand”.

After the fairy king grants him the feline body he’s always longed for, Tobi works to uphold his end of the bargain by serving as messenger between the fairy court and the powerful wizard Baba Yaga. The only thing that could break the fairy’s spell is if Tobi somehow manages to win the hand of a prince. Given Baba Yaga’s home is located in a monster-infested thicket, that seems unlikely.

But then a young woman named Robin Weatherwax comes to Russia to study magic under Baba Yaga. Before she’s even started her first lesson she’s gone and rescued a prince: a prince who loves cats, as it turns out. No matter what, Tobi can’t risk accepting the prince’s friendship. He’ll slash those spell-breaking prince hands to ribbons if he has to. If he doesn’t, he could very well lose his hard-earned cathood.

Brigid Collins writes fantasy and science fiction in both short and long form. Her short stories have appeared in Fiction River, Chronicle Worlds: Feyland, and Uncollected Anthology Volume 13: Mystical Melodies. Books 1 through 3 of her fantasy series, Songbird River Chronicles, are available wherever electronic books are sold. Follow her work by signing up for her newsletter at tinyletter.com/HarmonicStories, or check out her website at www.backwrites.wordpress.com.

“Claws at Hand” is the sequel to the novella “Thorn and Thimble” that just came out. So if you liked this tale, you’ll want to check it out.