Hide Search
You are here: Home / Information / Hotels: Things to Watch out For 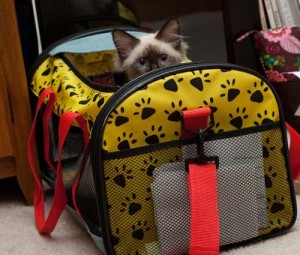 So you’re at the hotel. You have reservations. You’ve asked how many cats they take per room, right? Many only take two.

At any rate, so now you’re going in.

First the woman would always cover the carrier so we were less stressed should we see a stranger, or worse, a dog, as we went to the room.

She would plugin our Feliway difuser somewhere it was easily noticed so that she would not forget it in the morning.

Then she would examine the bed. Was the bed open underneath? If it had a box surrounding it, did the box come up to the wall. Was the box spring solid or did it offer openings that a creative cat could use to crawl under?

If the bed was not completely open but the stand the bed was on was not flush with the wall, she would stuff her paper towel rolls in between those places. If the box spring looked like it had openings, well extra bed pillows were stuffed around the edges. Even the nice blanket that was our safety net was stuffed in one area. Please be aware that certain hotels will not allow more than one or two extra pillows so use them wisely. Our “smells like home blanket” that covered our carrier did double duty plugging mattress openings once or twice.

For those open under the bed hotels, she really wishes she had taken a broom or something to force us to come out in the morning. Also, it would have been useful to persuade us to get out from behind dressers too!

We were not typically interested in behind the dresser, although at home that would have been a great place for us. We preferred the under the bed or behind the curtains. Make sure you explore those places before you let the cats out and look carefully! Some box springs may only have one small place that it is not covered underneath, which means it’s kitty fun time if you miss it.