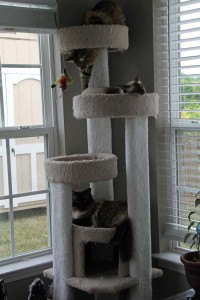 So the end of the journey comes and you’ve arrived at the new home.

It’s a good idea to use Feliway plugins in the main areas of the house you’ll be staying in at first. It’s also a good idea to give us a small space to start out in too.

This time, the Woman started us with our large carrier in the sun room with the Feliway. (Note: this is not a game of Clue. No one was killed). We started there because the woman was having the carpets cleaned and there wasn’t carpet in the sun room. She also thought we’d like the sun. We weren’t interested so we stayed mostly in our carrier as there weren’t many places to hide. She stayed there with us most of the time.

That night we were moved up to the master bedroom where we snoozed near them as much as possible. Actually we hid in the closet too.

The next day, our stuff came and we were moved back to the sun room because that room didn’t have to have any furniture that needed to be placed there immediately.  It was our safe room. We could have been put in a bathroom but this allowed the woman to spend a little time with us. The important points though were:

After the moving in was done, we were moved back to the master bedroom with all our stuff. We were kept in there for the rest of the day and the night. The next day we were allowed out that evening for an hour or so under some supervision. Gemini and I did fine. Ichiro not so much. We were herded back up to the master bedroom, which was our final safe room, when the woman went to bed.

For the next few days the door to the master bedroom was left open during the day and we could come and go as we pleased (or not). We continued to have a litter box in there and were fed up there. We had Feliway plugins. We were locked in there at night with the people.

We continued this pattern for about ten days, when the woman noticed Ichiro exploring the house on his own. At that point she started feeding us downstairs but keeping some food and water upstairs in the same room. We continued to be locked in at night for a full two weeks. We were then allowed to explore the house as much as we wanted. There was no stress from anyone. In fact, Ichiro seems less stressed by visitors now than he was when we lived in our other homes. He likes to sit at the stop of the stairs and watch workers and delivery people. He sort of adopted the whole upstairs as his. He also has some other hiding spots downstairs in case he can’t get upstairs before the woman answers the door. But that’s just him.

And that’s how easy it is to move with cats. Doesn’t it make you want to go traveling with yours?