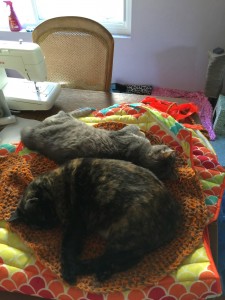 For some reason this didn’t come through my email right away but very soon after I was lost, Cody and Gracie said, “Are you at the Monument to Swedish king Gustav II Adolf in Gothenburg, Sweden?” and then Derby and Ducky said, “We agree with Camie’s Kitties. Just a bit more information. Gustav II Adolf; widely known in English by his Latinized name Gustavus Adolphus or as Gustav II Adolph, or as Gustavus Adolphus the Great; was the King of Sweden from 1611 to 1632 and is credited as the founder of Sweden as a Great Power. More info below. http://www.britannica.com/EBchecked/topic/249789/Gustav-II-Adolf.”

And you know what? They were right! That’s where I was. So that was a relief. I mean they might eat Lutefisk in Sweden too and well I came close enough to that already. Because if there is a fish a cat should never eat, it is Lutefisk.

So yeah for the cats and thanks again to Flynn and his family for sharing their travels with me so that I can go to all these interesting places.