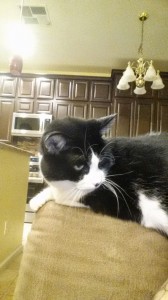 Well I had hardly asked for you all to search for me, when Max came by and said, “Dood..are you at the hotel in Vegas with the mini Eiffel tower? I think it’s called the Parisian or even just the Paris Hotel…” and he was right!

I bet it’s because his people did the same image that my humans did. There was a guard up on the Tower who was telling folks to take photos at this angle. He seemed really excited about that particular view. So anyway I’m found.

I also found out that my bud and often times travel arranger, Flynn has lost weight and his folks are a bit worried about him. So if you haven’t gone and given him some purrs, could you do that?