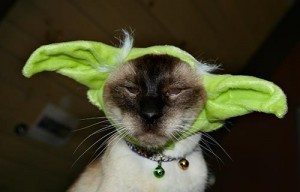 So, surprisingly Mao found me this week. I don’t know what he was doing in Smartypants rather than Crankypants but he was.

And then the Furkids came by and said, “We agree with Maobert! It’s the Black Angel. Here’s what we found out about it: the Russalka Memorial is a bronze monument sculpted by Amandus Adamson, erected on 7 September 1902 in Kadriorg, Tallinn, to mark the ninth anniversary of the sinking of the Russian warship Rusalka, or “Mermaid”, which sank en route to Finland in 1893.

The monument depicts an angel holding an Orthodox cross towards the assumed direction of the shipwreck. The model for the angel was the sculptor’s housekeeper Juliana Rootsi, whose grandson is the politician Tiit Made.

Mao, of course, thought the Furkids were showing off.  We think they were great! And we must thank Flynn and his mum for sharing this great photo with us!