Hide Search
You are here: Home / The Latest With Chey / Our Writing Process 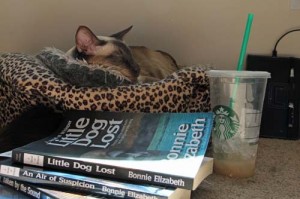 We were tagged by Truffles over at Melissa’s Mochas, Mysteries and More for the Writing Process Blog Tour.

What are you working on?

Personally, I’m working on a nap but that’s just me.

The woman is working on several projects. She’s working on transcribing some video interviews that will go in a book for acupuncturists about called Untold Stories: 12 Acupuncturists Tell their Stories of Success, which will be out in about a year. She is the editor of this one, not the only writer.

She’s almost done with Death Interrupted the fifth book in the Whisper Series that comes out under the pen name Bonnie Elizabeth. This is going in for final changes by her and then will be proofed by the proof-readers.

While she waits on that, she’s writing short stories and is playing with writing a children’s book. The kids book will actually involve cats, even it doesn’t involve me. But hey, that’s a start right? And down the road, she’s gotten in some preliminary edits on Whisper Six (for all you fans) and has also worked on Steampunk novel that she’s not sure if it’s worth continuing on but probably is.  She recently finished another fantasy mystery, but that one turned out to be 60,000 words of back story. So she’ll need to work on that but before all of those things happens, she wants a first draft of Whisper 8 so readers won’t get mad at her.

Why do you write what you do?

I just dictate my life. Or the life I ought to live. When I’m lucky the woman transcribes it. Lately she keeps talking about not time..

She writes what comes to her. It is always stuff she wants to read. Some short stories are experiments in style or setting. I think she should write more about me but she says the muse doesn’t go there.

How does your writing process work?

The woman writes a draft. Goes on to write something else. Usually she comes back to edit said draft. If she can’t finish it because it’s bad, it gets tossed. If she really wants to tell that story, it gets a major re-write. She’ll keep writing things and editing things between books (which is how she has so many things going on). Often while she’s editing a fiction book, she’ll write a non-fiction book for acupuncturists because that allows her to write (which she prefers) over editing and changing. But that keeps her on track. We try to write 4,000-7,000 words a day and we’re pretty good at keeping to those goals. Editing is always about 30-50 pages a day (depending upon whether it’s an initial edit to see if it’s worth keeping or if it’s a more serious edit that needs more time). On days when editing is the focus, we usually only write about 1,000 words a day.

After the Woman edits something three times, she gets a real editor to go over it and then she makes those changes and finally there is a copy edit/proof work and then it goes to Kindle and CreateSpace. Of course, the one she is mostly transcribing/editing will be a little different.

The Meezers. We really want to know how they always manage to make us laugh.

Max The Psycho Kitty (my favorite author). Maybe I can pick up some pointers?

And anyone else who has a process and wants to share! Or even if you don’t have a process. We always come by these so late that we have a hard time finding folks to tag!