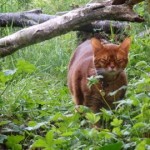 Well this was a hard one. I thought it might be easier as I was running around on the Woman’s drive to Las Vegas and she stopped in Salt Lake City. The Poupounette Gang finally found me there saying, “Your hints seem to point at some place in the vicinity of the Great Salt Lake, but where and what?” And that would have made me happy! But they went further and found me at, “SALTAIR!!!!!!”

And I think they were right. I think because there was no sign. It was just a cool looking building on the Salt Lake! But it does look as if it could be a great party place (and Cory is bringing snacks).

Iza, Ayla and Marley were doing the best before that. They said, “You are THERE!” And yes, I was there. Really. And getting wet in all that rain (but at least it wasn’t snow).

I bet it was the Beebs who found me. Doesn’t it look like a place Houbibi would hang out?

As for Waffles leaving Katie’s Smarty Pants in Las Vegas… well I have no words.