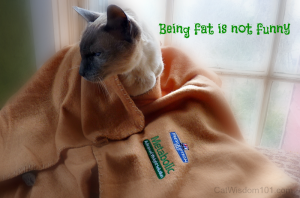 Well this was one of the few true ties. Both Vincent and Vespa and the gang at Cat Wisdom had comments come through at exactly 9:33 PM so they were about as tied as you could get. We decided since Vincent and Vespa don’t have a blog that we would put Merlin’s portrait up because he is a favorite of ours.

They both said, “Powells in Portland?”

Vincent and Vespa also said, “The languages section is in the red room….if it isn’t Powell’s, we are smoothering the mistress…and finding a new owner.”

Well, those two don’t have to do that fortunately. Finding a new owner can be difficult. I have been on a search for a good one for years.

The PDX Pride knew and even the Poupounette would have guessed correctly all the way from France (can you believe that?!). We knew Powells was famous but had no idea HOW famous! Wow.

The Florida Furrkids and the Island Cats knew it was a bookstore! Newton, Pierre and Ashton admitted to hearing about Portland all the way on their end of the country but did not guess it before the smarty cats did. Umm.. Katie didn’t get her pants on quickly enough (talk about a reason to find a new owner!)