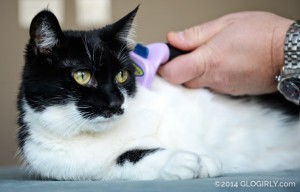 I was barely asking for help when Katie came by and said, “Are you locked up in Alcatraz?”

And she was right. Apparently Gloman and Glogirly were locked up there at some point (who knows for what–were they involved in the illegal fishy flake smuggling scheme?!) so they recognized the place. Katie did not even need her pants.

Flynn’s folks were hoping to go there (what is it with humans wanting to get locked up?) and the Woman, who wanted to go there (?!) said that she had heard you needed to reserve spaces early, so she and the Male went to do that on their first day in San Francisco. They had three or four but the tours were all filled until the day after they were to leave, so apparently to be locked up you must get a reservation early.

Humans. If I had known they liked being locked up, I’d have worked something out much sooner.

Alcatraz is now a State Park and there’s an amazing audio-tour you can take and walk virtually the whole island, inside the buildings, etc… You can even walk inside the cells, inside solitary and the hole. A number of years ago, they used to let people go inside the cells and then they’d shut the doors/bars. Until the bars MALFUNCTIONED and people were STUCK inside the cells. For a few hours! I think people may have even been stuck in “the hole.” They don’t do that anymore.

If you’re ever in San Francisco, Glogirly would HIGHLY recommend the tour. Make sure to do the one where you get off the boat and onto the island. ; )”

As the Woman said, she wasn’t in time to get to wander around the island because the Male didn’t make the appropriate reservations, thinking that the time they would be there would be enough to get them a place on a tour. Alas he was wrong (as he is about so many things) but she highly recommends it as well.

And to be honest, while all our humans are locked up there, perhaps we cats could party?! But until then, Happy Easter!