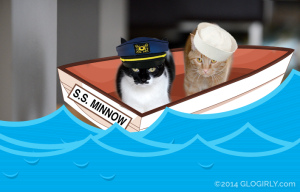 Katie guessed here but wasn’t coming up with anything. However, we gave her a big hint about where we had traveled and good memory that she has, she said, “Well we know you’ve been to the Oregon Coast Aquarium…is that where you are, Chey???” And look, she was even dressed for a deep-sea rescue!

And she was right. Her guess on the blog was about the same time Benjamin Fuzz guessed on Facebook, but we don’t count guesses on Facebook (although they do work as hints as we will say yes or no). But because Katie was here, she is the official winner (again).  Benjamin came by minutes later to say, “Darn it! Mom was going to offer to rescue you, Chey. She loves that aquarium!”