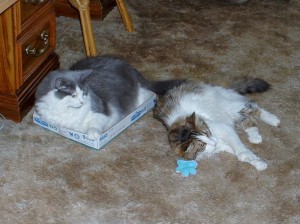 I admit, this was a hard one. But Truffle and Brulee said hey, come by and have some Meowgaritas and some Nip-chos and fish tacos and how could I turn that down? It was colder than I expected in South Carolina though but that didn’t deter Cory who suggested the southern United States. The Trout Town Tabbies who figured out I was in South Carolina!

Flynn said maybe I was in Lexington but couldn’t find where.

Laila and Minchie said, “OMC! We think we found you! We checked out all the Mexican restaurants in Lexington, SC and found that exact fountain in front of San Jose Mexican Restaurant on Augusta Road. We are starving now seeing all those yummy Mexican dishes! Oh, Chey, please don’t go hiding from us in such hard places. It would be awful if you were never found!”

Now seeing it’s Super Bowl Sunday, GO SEAHAWKS!!! Hey–we’ve only been in one other Super Bowl EVER and we’ve never won. You better believe this is a huge deal out in Seattle!