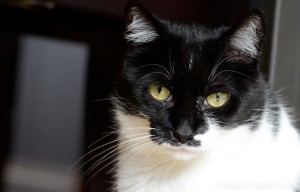 Well, Katie was frantically pacing around Facebook asking when I was going to post a picture of where I was. Her smarty pants were getting hot. And she  found me! “Whoops! I meant to say the Cleveland County Courthouse in Shelby, North Carolina!”

Apparently there is also a Cleveland County in Oklahoma too and she mis typed (or her human did) and wrote that first! We were surprised!

But I am so relieved to have been found and so quickly too!