[Today’s post is a guest post by award-winning author and editor, Kristine Kathryn Rusch. You can find out more about her at her website or read about some of our favorite books here] 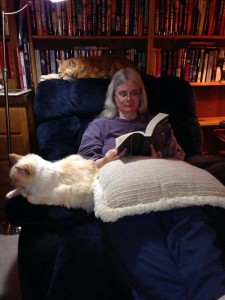 Cats have inspired everything from the nonfiction I wrote back in the day (articles for Cat Fancy and business publications under a pen name I no longer use) to short stories that I write now. I wouldn’t have written two of my most popular short stories, The Secret Lives of Cats, and What Fluffy Knew, if cats didn’t run my life.

The Secret Lives of Cats came about because I stumbled on a German blog called Mr. Lee. Mr. Lee, a lovely cat, wears a camera everywhere goes. His photos (the ones he’s taken) have appeared in museums, and he has even produced a short film.

I have a mystery writer’s brain, so I wondered…what if my cat photographed a dead body?…and wrote from there. The story ended up becoming one of my most popular e-books as well as receiving an Anthony nomination and winning Ellery Queen Mystery Magazine’s Readers Choice Award.

Usually, though, my cat stories come from a more personal place. In 1998, my cat Ashley died. Her mother was a purebred red point Siamese who managed to hook up with the wrong guy. So the breeder gave the cats away, including Ash, who looked perfect to me. She was talkative and delightful and a true princess. When she finally passed on, I was devastated. So I wrote the opening to a story:

“Fluffy knew she was a princess. Her person told her so. And Fluffy herself could see it, in her white, white fur, her long elegant whiskers, and her dainty paws…”

The story went from there, with Fluffy, who never left her home, saving the world. This story’s been reprinted all over the world (most recently in Danish), and it comforts me to know that Ash lives on. Fluffy would not exist without her. 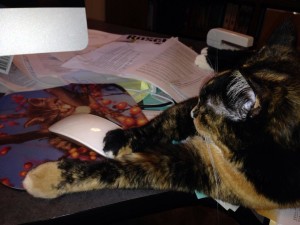 I have no idea how many cat stories I’ve written or how many stories the cats have influenced. Some of my aliens got their start from something one of my cats did. Some characters’ strange names come about because a cat walked on my keyboard (you know who you are, Molly).

They inform everything I do.

Both stories are available alone (linked above) or in the collection, Five Feline Fancies

Currently, I live with five indoor cats—Molly (pictured with her paws on the mouse), Galahad (above me as I read), Walter (beside me as I read), Ella (named for Ella Fitzgerald because she sings), and Monet (the beautiful cat who runs the house)—and one outdoors. His name is Little Tough Guy. He’s feral, but after three years, he finally lets me touch him. (I think our relationship got off to a rocky start when I threw him in a carrier and took him to the vet to lose a body part.)

I’ve written hundreds of short stories and novels under the names Kristine Kathryn Rusch, Kris Nelscott, Kristine Grayson, and a few I don’t admit to. You can find out more about my work at www.KristineKathrynRusch.com.

Get Chey in Your Inbox