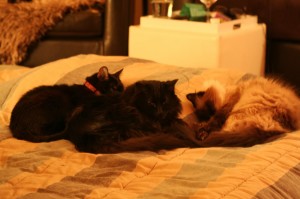 Well this one is a little bit easier than the last couple of weeks. Cory immediately said, “Winston-Salem North Carolina!!”

Katie got a little more specific and said, “Well his name was George Henry Black and he was a Master Brickmaker.
He’s standing across from the Winston Tower and the Forsythe County Government Center.” And then because she had to be sure those smarty pants were working after having been lost, she also said, “He lived to be 103 years old. He was a legend and even brick making machines couldn’t compete with his handmade bricks.…oh, and the Forsyth County Govt Center he’s standing near is on Church Street. Still trying to find out if he liked cats.”

So yes, I think the smarty pants are back on, don’t you?

The woman said that Winston-Salem rather reminded her of Portland. I wonder if that’s why Cory was able to find her so easily?