Hide Search
You are here: Home / The Latest With Chey / Meezer Monday: EFT and Me 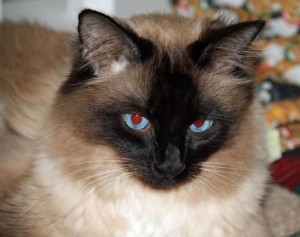 So Mom worked this super amazing business coach named Mark Silver two years ago (although she’s followed his free stuff for even longer and so she highly recommends him to anyone thinking of a coach) and she has remained part of the alumni program, which offers a supportive forum. There she found this man named Jeffrey Parker who lives in Germany. He was talking about doing psychotherapy with animals.

Well, it’s not exactly lie down on my sofa little cat and tell me about your childhood, it’s more body/mind connection interactivity. As many of you know, Mom is a licensed acupuncturist and she got really excited about all of this. She and Jeffrey had a Skype call on Friday morning, before his dinner and her morning errands (which includes stopping for chai. Hence she loves her morning errands).

So they talked and she found out more about what he does. He’s just started putting this into practice so this is very new and we were guinea pigs. As many of you may remember I meowed at night a lot when I was a kitten and then when we moved here. And, um, my Mom’s story of what happened and mine don’t always agree and so she thinks I might be not quite telling the truth. However, just because I see the truth differently, doesn’t make me wrong!

Anyway, Jeffrey said that I was probably really in denial about whatever was going on. (Really I’d rather be the King of De Nile than a liar, wouldn’t you?). And they could work on this. Mom had to close her eyes and merge with me. She knew when that had happened even if we didn’t really talk. Then he guided her through some EFT type tapping while doing some specific visualization about my denial and the anxiety around that. Then when they both felt that was cleared, they did some more visualization and more tapping. By this time I got sleeping and was dozing off on my shelf above the computer.

But then they talked after and there was only the vaguest hint of the feeling left over, which is really good, although I think Jeffrey would have loved it if there was nothing. Mom said that much of the imagery that came through for her about me was similar to what ‘Kaika’s shaman friend described when he worked with me and helped me stop meowing.

Jeffrey works as Mr. Dolittle (that spelling) and he does this work that means that the person who can talk to him merges with their animal and then the tapping and body sensations that come up are done through the human. Mom doesn’t think she’s particularly good at merging with any of us (except maybe Georgia, who went before and Ig who was long before that) so she was surprised that it worked.

While we didn’t immediately see results (she hasn’t had anyone ask me questions that she thinks I lie about recently), I did come up on the bed and make biscuits with her. I don’t make biscuits. EVER. So she thinks that is an interesting change.

At any rate, Jeffrey may be looking for a one or two others to be guinea pigs. Not literally. It can be any human and pet combination to help him get some testimonials and to work out any kinks in the process of working with people and animals by Skype. If you are a technophobe, setting up Skype is really easy. Yes, I know you all know that Mom is really computer savvy but she hates phones and so Skype was an issue for her but it worked really well and was easy to do. Let us know what you think of this in the comments and we’ll be sure to let him know about all the comments.