Hide Search
You are here: Home / The Latest With Chey / Sunday Guest Star: The Chans and Flynn 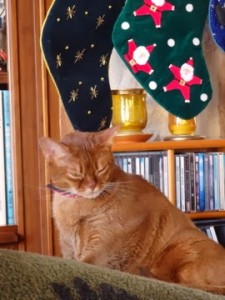 Well this one was hard. As cats started circling the area it got harder. Flynn found me in Oregon pretty quickly but had some trouble with the city.

Bibi-Chan, Sei-Chan, Tama-Chan, Genji-Chan, Tommy, Vidock and Violette(did I get everyone off the top of my head and spell them all correctly?) said, “Ashland, Oregon? The Shakespeare Festival site?”

Well I wasn’t at the festival site exactly, but I was at Ashland. Flynn kept guessing until he said, “No, it’s the Ashland Hills Hotel and suites.” 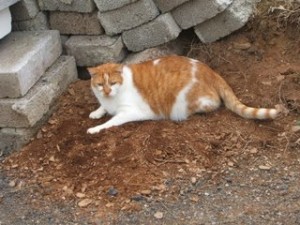 So he even got the hotel. Of course, he did not say I was on the third floor balcony overlooking the little courtyard… But I guess we can’t have everything. We had to go downstairs and have some fish and chips, although we don’t make them as good as they do at his home!

Cory found us too! “Oh that clue was a give away…Ashland Oregon home of the Shakespeare Festival. I was just too late. purrrrr” But she wasn’t too late to join us all eating food!

A computer glitch kept me from seeing Flynn’s last post until too late so we are honoring both him and the Chans today!