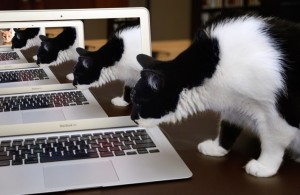 So there I was, hoping to fool everyone but Katie knew exactly where I was. “Madeira Island, Portugal???” “And more specifically, the statue is called “Cristo Rei Garajau””

Of course this statue looks very similar to it’s larger, more famous counterpart in Rio but Katie was not fooled in the least! Flynn of course suggested I visit and we would eat fishy flakes until someone got it. Sadly Katie was too fast!

Speaking of Rio, Katie said, “That’s what we though first!  But when we looked at the details on their statue it was definitely different. We actually found it through a Taxi Cab website.” Lest you worry that Katie is forced to hail taxis on her world journeying, she has not actually had to do so. Just so you know. Because I was momentarily worried.

Pierre, Ashton and Newton said, “Katie’s gonna need a pair of pants with “smarty” stitched on!” And Katie and I are working on that. We figure one of these weeks when my human is too lazy to post, we’ll have Katie show off those pants and how she made them!