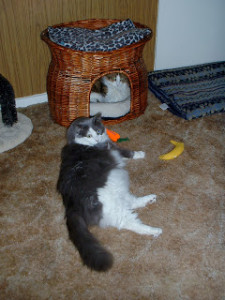 Well, Flynn and I talked about it. And he said, Yes, Chey this will be a hard one! And I said no. I have cats who are real smarty pants. But Katie didn’t find me.

Da Tabbies o’ Trout Town said, “we iz knot online this week oh end sew we canna look up pictures but we is gonna say this be de place in England wear de pilgrims got on a boat N sailed ta de US, N they got heer N gave thanx and ate a dam burd…enjoy yur week oh end!” And yes, that was right so far as it went.

Laila and Minchie said, “Chey are you at the archway to the Mayflower steps in Plymouth, England?” and they were even more right!

Derby and Ducky came by a bit later saying, “Hmmm on further research we found that they were called, Pilgrim Steps, Plymouth Harbour, Devon UK. And mum found a picture from a different angle and also found that they also called them the Mayflower !.”

Flynn said, “Mum was looking through her photos and saw one of the Mayflower Steps which is in the old Barbican area of Plymouth, about 5 miles from where we live.It is the place that the Pilgrim Fathers had to stop to make repairs to their ships which were damaged in a storm in the English Channel before they finally set sail for N.America in 1620…She has just had a horrible realisation. She remembers the 350th celebrations and it is only a few years off the 400th anniversary!!”

So, seeing we’re close and we’ve filled up with food at Cap’n Jasper’s, let’s all go see Flynn!

Just as an aside, we always tease Katie because she’s found us so many times, we’ve taken to changing up our Sunday Guest Star name with her, but over the years Laila and Minchie have found me eleven times!