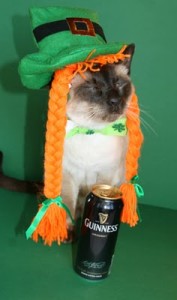 Well I was hardly lost at all when Mao came by with his smarty pants on and said, “Newark Castle, Glasgow Scotland.” And he was right. He certainly surprised Flynn with how quickly he found me Flynn was waiting for a private party there with me because he suggested this Castle would look good on me. And he was right, don’t you think?

Now, there is something I need to point out. I’m back quite far in Skeezyville and also on Mousebreath for one good photo of Mao. Just Mao looking as regal as a Meeze as he is and back to 2009 there are no solo shots of Maobert!  In fact, what I did was, I did a google search for Maobert Snickles and MY BLOG was the first entry that came up from back ages ago when he’d show off his smarty meezer pants and find me. So that’s the photo I used.