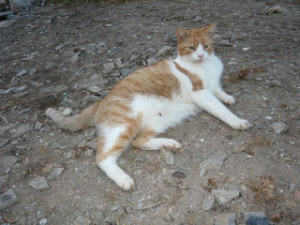 Well so Pierre, Ashton, Newton and cousins knew I was in Mexico. They thought I was in Cozumel (and honestly so did the woman for about an hour), but I wasn’t. Flynn, having guessed off near Chichen Iza said, “Valladolid is the nearest to Chichen Itza, but as it is not there I will try Cancun or Merida. I am still working on it though.”

And yes, I was in Cancun. No one got the hotel. I was not at the Hotel California, which is what the Paw Relations gang guessed.

Flynn never did get the hotel so we are meeting at the square. Which is good because buses run along there all the time so it shouldn’t be too hard. I mean it’s not like there are dozens of hotels along the strip there in Cancun.

I did post a clue on my Facebook page.  I am in front of the GR Solaris which is an all inclusive resort that serves lots of real live dead shrimp and other nifty foods. And drinks. So the Purrfections and anyone who wants to join me here in this big old litter box can all enjoy nip tinis on the house!

Now I think I hear Cory on stage singing…” feel a song coming on…”at the Copa…Copa Cabana” mew “music and passion were always the fashion at the Copa….don’t fall in love Chey” mew”