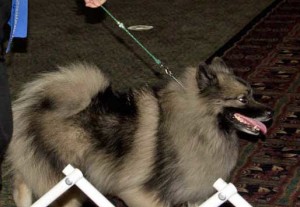 Well, this one was a hard one and I expected that. Flynn had his smarty pants on getting that it was in Washington  from his first comment, “Is it near Spanaway Park, Spanaway, WA?” but he was too far north.  Then he said, “I think it is Vancouver in Washington and the dog is called Skyline’s Unit of Measure.”  And he was right about Vancouver, but that is not Skyline’s Unit of Measure.

Nikki came by, “Okay, I have no idea who got this picture but that is of my mother and her dog D’Artagnan. If I had to guess it was taken at a dog show in Oregon or Washington in 2012. It was hosted by the Mt Hood Keeshond Club.”

And between the two of them, Flynn and Nikki got it right. That is D’Aragnan and her Mom, which my human visited with when Dart was being shown. And you might wonder why my human was visiting with people who show dogs? Well, they’re cousins. Yeah. I know she’s related to people who serve dogs. This explains so much…

They were in Vancouver, Washington at the Red Lion Inn at the Quay. For those of you who wondered why I could be there, I mean, it WAS a Red Lion… It’s a cat for heaven’s sake’s. How was I supposed to know there would be dogs.

And Laila and Minchie were the first to identify that the dog was a Keeshond! Good for them! And that is the Columbia River and Portland in the background. Clearly you all were stymied by the dog! That’s why I don’t normally put people in the pictures!