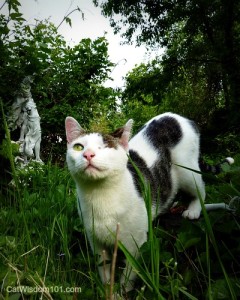 Well, I was starting to worry that I’d be getting a little high all on my own all weekend. Flynn invited me there but no one found me.  However, after many clues, like drinking Blue Hawaiians and hard Grape Nehi’s, the cats from Cat Wisdom finally found me. They said, “Curaçao?”

Less than an hour later the Poupounette gang found me saying, “We have also just come to the conclusion it might be Willemstad, Cuaraçao, as in “blue”….! Also “nordic”, as in Dutch? but it’s rather a long way from Cuba…”

Of course, I’ll say yes, it’s a ways from Cuba, but Cuba was the closest I anyone had come on a guess. Until Argentina which came later and then that’s debatable. I’d have to look it up and that might take work. And you know I don’t work. Especially after drinking all that liqueur.

Proving that his owner also enjoys a nip now and then, Derby and Ducky said, “Goodness, we got home and figured from the Blue Hawaiian drink where you would be. Curaçao, but The Chan’s beat us. We blame mum for not being home.”

Well maybe if she hadn’t been out drinking her own Blue Hawaiians you would have found me in time….

So I would like to thank Flynn and everyone who found me and perhaps next week I’ll have something a wee bit easier!