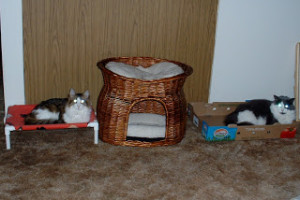 So I was lost and Cory immediately guessed I was in Scotland. Prancer Pie said I was in Orkney in Scotland. Then Laila and Minchie were very specific saying, “Chey, are you in the Orkney Islands in Scotland at the four Standing Stones o’ Stenness? We think they just may be a little too tall to jump to the top. We’ll send a boat to get you.”

Yeah! They were right!  Of course so were Cory and Prancer Pie but they were not quite as specific!

Flynn, of course, knew exactly where I was because his humans took the photo on one of their many vacations. One of these days we’ll actually get around to having our own vacation photos again and maybe they’ll look warmer and be some place some new cats recognize. You never know. I love wandering around the world and learning more about it!

There may or may not be a Find Chey Friday next week because late late that Sunday the Woman will be leaving and she is not sure she’ll have to time to blog that weekend. So you may get a couple of weeks without having to find me. Imagine that. I’ll be home, stuck there with Ichiro and Gemini. And part of that time without the woman which I think is horrid beyond belief!