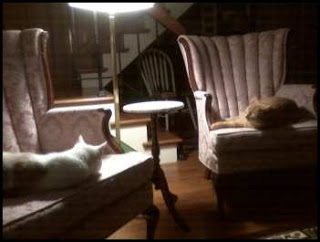 Well, this was easier than I thought.  Finnegan, Buddy and Jasmine came by and said, “Astoria, Oregon we’re purrty sure! Be careful on that trolley, Chey!!”  Wow, so fast.  I hardly went anywhere on that trolley!

Eric and Flynn were helpful and added information so that I could enjoy my trolley ride, “We just found it too. We looked at the photo in our reader instead of coming here first to see if you were found. This is what we found when we googled “trolley car 300? :Ride the newly restored Old 300 trolley along Astoria’s waterfront. The Old 300 was originally built in 1913 and is a 20-ton, 40-passenger trolley. The trolley will travel on Astoria’s original train tracks between the East End Mooring Basin and West End Mooring Basin, and will pass along Astoria’s historic working waterfront. Concats to F,B and J.”

So wow, wasn’t that fun.  Now, for all those cats who think, Wow, I’ve never gotten one once in 200 finds, that means nothing. I know cats who insist they never find me and then go through phases of finding me every week.  Also, Finnegan, Buddy and Jasmine said I should go visit them, but I’ve been to the Carolinas several times, both thanks to the Woman as well as Mom Paula!