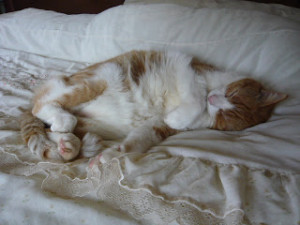 Eric and Flynn said, “We are going to sack our mum because she really thought she recognised the place. Is it Salem? We still have no idea which ship it is though.”  And then, da Trout Talking Tabbies said, “de name oh de ship we think iz friendship”  And yes, they were right!  Eric and Flynn found the right ship just moments later–but no worry there is fish for all!

Derby said, “Derby Wharf, Derby Street! Why didn’t I know about this place all about ME.”  Wow!  I had no idea I was honoring such a good friend.  Why yes, Derby it is all about you (when it isn’t all about me).

Angel Zevo Hussein Calamari came by to educate us, “This is the Friendship which is usually docked in Salem MA at Derby Wharf. It is also the ship commandeered by Captain Jack Sparrow and the Pooses for Peace. This took place when the headquarters for the domestic tearrist group was in Salem run by the infamous Zevo hussein Calamari. http://wwwzevocalamari.blogspot.com/2010/09/friendship-missing.html Thank you for honoring her with this Find Chey blogpost. xoxoxo”