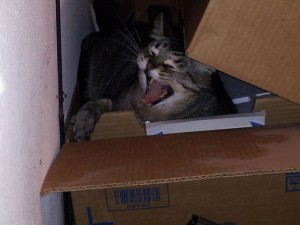 Although their comment didn’t show up (thank you spam filer, holding it in pending) Vincent and Vespa were the first to guess where we were.  They said, “We know exactly where you are Chey. Our mistress went to see it when it was being built when she was a very small girl. She also lived three blocks from it for several years in the 80s. It is the dome shaped fountain in the big courtyard at the Seattle Center. Each of the nozzles can have different amounts of water shot through them and sometime they (or did during the 1962 World’s Fair) have lights and music along with the fountains. The master’s father was one of the architects who worked on the Seattle Center design. We don’t think that most cats would enjoy visiting the fountain when it is playing…too much water.”

I was surprised that Truffle and Brulee did not get it as their person was there with the Woman when this was taken!

The photo is a picture of Vincent.  Vespa was supposed to have a photo but only this one came through. They live with Foyle who is a black poodle and is an SAR dog, which really impresses the heck out of us totally.  I mean, Search and Rescue, how cool is that. These two cats have it made don’t they? (Um, even if they don’t have a blog or anything).