Hide Search
You are here: Home / The Latest With Chey / Sunday Guest Star: the Florida Furkids! 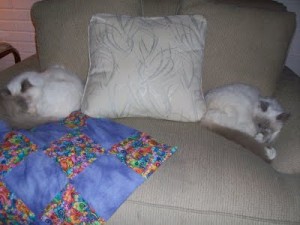 I love it when I’m out and about and I’m found by a cat that doesn’t usually find me.  The Florida Furkids found me and they were so excited.  They said, “OMC….maybe???? Lumberjack statue Paul Bunyan & Blue Babe Klamath, Trees of Mystery, Redwood, California, USA”  They were right on!

They said they’ve never won before but I think they might have a couple of years ago.  We could be wrong.  The woman has a very poor memory but she THOUGHT they had but it was like a REALLY long time ago.

Cody and Gracie also knew where we were but since they’ve been winning all our California excursion sites, they sat back and waited to see if someone else would find me.  They did not have long to wait.

Nellie got very excited thinking we were in Minnesota, but we weren’t.  We’re rather sure of that as the woman was actually there taking the photo and it was California.  Beyond that she’s not really willing to argue.

And yes, most cats got that it was Paul Bunyan and Babe the Big  Blue Ox.  And yes, Paul Bunyan really does talk and answer questions that are posed to him by children.  Apparently he does not talk to cats, which seeing he has an ox is rather specist of him.