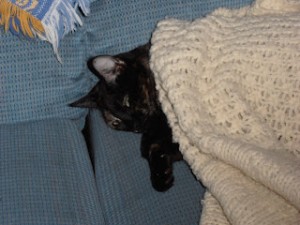 The Purrfections also knew where I was and da Tabbies o Trout Town also got it.  However, no one knew what game I was at (as little bit of a harder question but thought I would see who could come up with it.).

I was actually at the Reds game, which seems appropriate as the Reds will be playing the Giants in the playoffs coming up.  The Male actually planned the San Francisco trip so he could be there in time to see the Reds play because he is a big Reds fan coming as he does from Cincinnati.  The Reds lost that day, which does not make me sad for him at all.