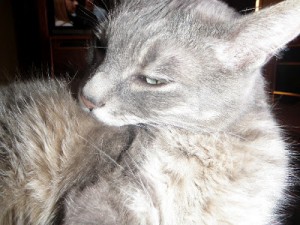 Well there were some great guesses from all over the map.  Laura and Taffy first said, “Or are you at Chicago Vintage Motor Carriage in Chicago, Illinois with the 1948 Tucker Torpedo? Or perhaps at the Francis Ford Coppola Winery near Geyserville, California with his 1948 Tucker? Is that nice man telling you all about the car, Chey? Purrs.”

And the Woman missed the second sentence because she saw the first line. We are not in Chicago.  But then Prancer Pie came by and said, “Yep, it’s at the Francis Ford Coppola Winery. Dang, we were so close!” Which we did see.  So we gave Prancer the credit in our comments but it was really Laura and Taffy first.

And yes, we were at the Francis Ford Coppola Winery.   We were not however, in a photo with Robert DeNiro.  We were only there with a tour guide who probably looks a bit like DeNiro seeing the frame cut part of his head off.  I guess that will do it to a person.

Eric and Flynn googled the answer and decided Prancer Pie was correct (Wow! Listen to these cats!)

Many of you are thrilled at the thought of riding in a Tucker Torpedo, which is the car this is.  Amazing huh?  Who’s ready for a ride?