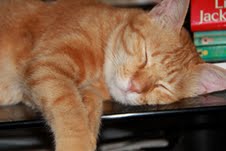 The person who serves, Au, Target and Guido has published several books. Target is the outspoken spokes-cat, who told us about his human, author Ellyn Whyte.  They are based in Malaysia but you can find their books on Smashwords, Barnes and Noble and in the Apple Store.

The Katz Tales books are based on Ellen’s column at the Star, which is a popular Malaysian newspaper.  Target is the official supervisor of this work which chronicles the lives the cats.  Her Logomania books are based on a column called Logomania where she tracks down and explains where certain phrases come from. Target says, “‘To ride a tiger’ means that doing something that’s dangerous if you stop – like giving us treats every ten minutes and then stopping.  i mean, you’d get The Claw, right?

“Anyway, this was a Chinese proverb that was brought into English via William Scarborough’s 1875 Collected Chinese Proverbs.”

“Sometimes we write just one paragraph after a whole week’s research. But it’s fun!  And I’m absorbing all sorts of new things.  That is why my stripes are spreading.  It’s not because I’m fat like Au says.  And it’s not true that I’m about to cause a local gravitational collapse either.”

Someone sounds like they are listening to Maobert a little too much… Yes, Au, I mean you…

There is even a romance book in the list! How versatile Ellen is!

Of course, the Katz Tales are the favorite books.  Even the author admits that!  And I mean, what cat wouldn’t like a personal biographer?  I certainly need one.

At any rate, what’s next?  Target says, “We’re planning a Katz Tales book for Christmas.  Or maybe two if we can write some extra stories. And also our Logomania books will be coming out as ebooks in a few months.  We just signed the contract yesterday! At least, Mummy Cat signed and I licked the pages and put a little fang imprint on the pages so the publishers at MPH know I approve too.”

So that should be a great gift for the cat lover on your list!  And shouldn’t all humans be cat lovers?

Because Au, Target and Guido are in Malaysia, we wondered where their human sold the most books.  After all there are a lot of English speaking cat lovers around the world.  Target says, “We sell mostly at home in Malaysia.  But we’re furry excited to be going international now.  We’re on Smashwords, and Barnes and Noble and we’ve heard we’re on Apple’s iBooks too!   We can’t see though because Apple won’t let people in Malaysia see their stuff.  Not even if you write it.”

“We like the Internet because we can now buy books about cats in other countries that aren’t sold in Malaysia.  And we’re hoping catsefurrywhere in the world will now buy our books and read about us too!”

And of course, I wanted to know how I could get her to write a biography of me.  Alas, she is not into fishy flakes.  Target’s advice, “You know something strange, Your Majesty? Mummy Cat hates fish! Really, it’s true.  She says she works for cat biscuits but I’ve not seen her
eat any.  She likes Absolut vodka though.  Maybe if you offer her a case of that?

Note: We would have linked to the Apple store too but could not find the link, as the Woman had a heck of time even finding the iStore–she can find the place to sell computers and stuff but not books.