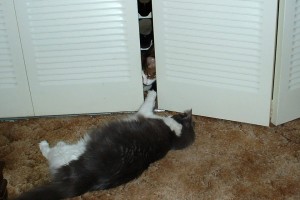 Well it was looking like a hard one.  Only Laura and Taffy were even close.  Someone thought I was on the east coast of Maine.  Between Taffy and the fact that I was on the other coast, some cats started zeroing in on where I was.  Laila and Minchie said, “Are you at the Aquarium Village in Newport, OR?”

And so I was.  Those cats are good.  Now Laura and Taffy were a little disappointed because they guessed Seaside, OR and I said no.  However, to be honest the Woman had to double check and make sure I wasn’t in Seaside!  She thought that they had visited this place, just as a roadside stop to see a wire whale or some such the thing the Male wanted to see, but couldn’t remember what day it was.

After he found the whale, which is out front, they went into a little shop where they found a lovely statue of Ganesha laughing, which goes perfect in the bathroom where they needed a statue for Feng Shui reasons and for said reasons the Woman had wanted Ganesha, for much less than they expected to find it.  The Woman was a little bummed that the Male didn’t seem all that interested in shopping around there in the village and they did have to get to Grants Pass for the night that night.

Ah well, I’ve been found!  And for the rest of you, who were looking at the bosoms, um.. I needed your help. Thanks a lot.