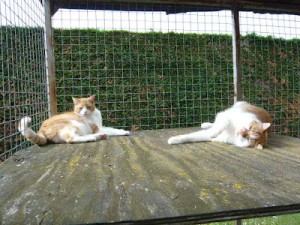 Well this wasn’t difficult at all.  ‘Kaika immediately said, “Are you in La Conner, Washington?”  That was followed by Eric and Flynn (who were a little more specific), “We think it is the Swinomish Channel at La Conner WA.”  And so they were right.  Grayson, Gandalf and Gracie  said, “Yup, we can read La Conner WA on the boat and we can see the Gargoyle on the boat tie off,” which maybe why I was found so quickly… The Woman missed that.

For those of you who were worried about rain, this was Easter weekend in La Conner.  The humans had one good day there but the tulips were not yet in full bloom so the fields weren’t nearly as pretty as they usually are.  The Woman takes her camera around anyway to take more photos of the place.  She was hoping for a nice landscape to hang on the wall but no such luck.  Oh well.

This will be the last Find Chey Friday until the middle of July.  Yep.  Next weekend will be any easy find: BlogPaws 2012!  Woo Hoo!  Did I tell you the Woman won a trip there?  Her airfare, hotel and registration were all paid for.  You gotta enter those contests folks!  We’re likely to meet with Zee and Zoey’s mom, Sparkle’s mom, the Food Lady and Junior, Orion and Sammy’s mom too!  I think Curly Swirly Teri will be there too (and maybe one of the Furry Dance Cats!)  Flat Chey will be there with the Woman.  Personally, I don’t travel, except for Find Chey and if you know where I am, what kind of fun is that?