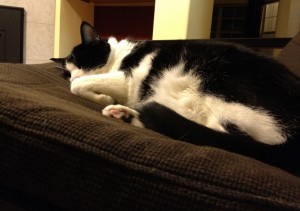 Well it is a mixed up week.  I was lost on Friday and found and we all hung out in London having fish and chips and it was great.   The Carolina Cats found me in London and Max found me on Fleet Street and that was exactly where I was.

Everything was going great and then blam.  The internet died.  And stayed dead.  Maybe we ate it with the fish? I don’t know but it was a bummer because like the Carolina Cats and Max had never ever been Sunday Guest Stars (or at least not for like a really really long time and now I couldn’t even tell the world!).

Broadstripe promised us they’d have someone out by 8 but no one ever came.  I guess their power was down so the first person the woman talked to at 8 was all, we can’t tell you anything.  Then the Male called at 9 and they were like, we still can’t tell you anything but we’ll put you down for tomorrow.  Then at 9:20 the tech called us.  He had had a really really long call because apparently he doesn’t know Macs and couldn’t find something really important on a Mac to fix the cable and it basically took him all day so he was super behind.  He got here around 9:40 and worked until like 10:20 or so to get our cable fixed.  There were a bunch of little things wrong but nothing that seemed to make the cable die like right now, dead. However, a few of them should make the system less glitchy than it’s been at this house (due to the original guy hooking things up wrong–we have a special cable thing that goes to all the rooms in the house so we can have internet hardwired throughout, so no time loss with wireless AND it’s more secure).  We’ll see.

So that was Sunday.  Then today I was supposed to have a cool photo of all of us because the Woman will be running down to Portland to see her cousins who are in a dog show that’s in Vancouver WA this week at the Inn at the Quay for any Portlanders who might want to go see dogs.  It appears to be mostly Tuesday through Friday which is really inconvenient so that means that Ichiro and I are stuck with the Male because he has to work.  This means this will be a week without Chey and I don’t know how anyone is gong to handle that but I was going to give you a really big picture of me to last you but I have to honor Max.