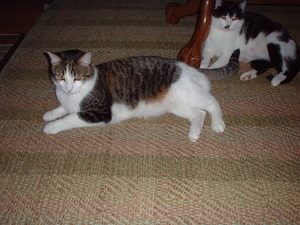 Well, The Chans invited me back to France for some cuddles and running around with the Beebs this weekend and I took them up on it.  Well, okay so they don’t live here but they live closer to this place than home.

I thought this might be easy but I had no idea how easy when ‘Kaika came by only minutes after I put the post to say, “Are you at Mt. Saint Michel?” Simba and Dora the Explorer (of course!)  also knew.

Several people called it a castle and as the Chans said, “it’s not a castle. it’s a church! And the bit at the top is known as “La Merveille” or “The Wonder. Purrs, The Chans.”

Now that doesn’t mean that when I take over I won’t make it a castle.  I find that it’s great that there will be a place for people to worship me already there. Building that kind of thing can be so tiresome!  If you would like to read more about Mont Saint-Michel here is the Wikipedia link.  Because of the great fortifications, Saint-Michel has been used as a backdrop for a number of historical fantasy tales (often with the named changed).  It is something the Woman would love to see if she ever gets back to France.