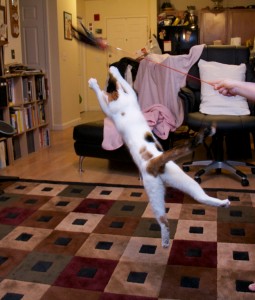 Well I didn’t have far to go and everyone really seemed to know where I was.  I was pretty impressed.  Pixel and Samba were the first to be there (and are showing off how happy I am to have everyone find me).  They said, “Are you home?”

Several cats noticed that the house is painted in Meezer  Colors.  And well it should be.  The Woman didn’t realize that until it was pointed out. Until then she was bummed that she did not get a green and brown house as those were the colors she liked the best.  Unfortunately the builder had the community planned and we did not get to pick what colors went on the outside of the house.  Right now the Woman isn’t sure why as it seems that the designer for this subdivision likes brown brown and more brown.  Not one house has the nice green from the subdivision next door (same builder and finishing as ours started–but it had no more lots for the floor plan we liked.)

We do like that the house faces north/northeast.  This means that we will have lots of bright light in the back yard for planting a garden.  It probably won’t be much this year as there is some structural stuff the humans want to do but next year I bet we can go wild with veggies. I might even try growing broccoli for my friend Roxy!

Also, when the Woman is in the living room in the back and in the master bedroom in the back you can see the sunsets over the valley because we are up high enough.  Also the angle of our house looks between the houses in the subdivision behind us so our view is pretty unobstructed.  Now if only we get some birds back around here so I have something to look at!

Derby and Ducky wondered why the cars weren’t in the garage.  Because the humans haven’t even organized the house much less started on the garage!  Probably by summer they will get the cars in the garage.  There is a workbench that needs to be built and some ceiling racks that the Male wants to get up before he starts putting the cars inside.  Then he can arrange to his hearts content.