Hide Search
You are here: Home / The Latest With Chey / Meezer Monday ME! 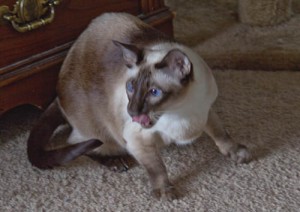 It’s about time I get back on my blog on Monday.  As you can see I’m all atwitter (and not like the internet program of the same name).  I WON!  I was at the Acatamy Awards with Billy Crystal and Jackson Galaxy and Zee and Zoey and I won the Hipster bag!  It’s got like all kinds of good cat toys and coupons and things inside the bag.  Now I have no real use for the bag (actually I thought that Jackson Galaxy came with it but apparently he doesn’t, which is too bad because now who will play with toys with me?).   Anyway I can use the stuff inside which is supposed to have wild stuff in it.  I am over the moon excited.

This was of course the perfect opportunity for me to wear some of the fine outfits I had from my presidential run. In fact, I had planned to wear such a necklace in my inauguration ball until of course, I was not inaugurated because a bunch of SPECISTs said that cats can’t be president nor can we vote.   As if.  Cats can do whatever they want.

Listen to Zee and Zoey, “our modest and unassuming friend,Cheysuli…”  Can you believe that? Aren’t they da bomb?!  They know me so well…

And wasn’t it great that these cats got all those gifts together?  It’s so wonderful.  And thank Myself that I won!  I’m having a great year!  I can’t believe it!  And now, I even have Meezer Monday. Sorry Ichiro fans.  No little Poots in Boots today.