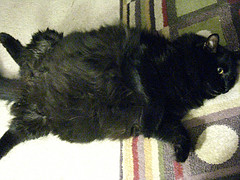 Pixel and Samba suggested a lovely place for me to visit.  Their humans have great places to go.  I liked it and thought it would be a fun place and perhaps one to perplex, but no Jasper McKitten came by and got it right away! I was very excited.  It was rather cold there and kinda wet.

Jasper said, “I know one! It’s the Swarovski Face Fountain in Wattens, Austria at the Swarovski crystal factory. What a cool place. I hope you had a good trip!”

I was quite excited that he found me.  Cody and Grace  also had an idea but they said they were moments too late–and they were right!  Domino, Merlin and friends also came by and said they knew it! Not too many other cats were there to guess.  Of course I wasn’t around to egg cats on.  We had no power from about an hour after I posted until late last night.  I was worried I would have to send a note via Facebook to other bloggers to let folks know why I wasn’t blogging.  But we got power back.

We were lucky. Some folks up the valley from us won’t have power until Monday.  That’s a long cold time for that!  Now all we need to worry about is flooding because now that it’s raining after all that snow, we might look a bit like that guy spitting water out of his mouth!  Winter in the Pacific Northwest can be fun sometimes.  We are not on a flood plain but the easiest and fastest way to civilization is through one, so traffic will be nasty when that floods.

Oh and the photo, not Jasper. It’s his friend Huggy Bear.  I really think he needs to get his humans to sort out their priorities.  There were no recent photos of him playing on the front of his blog…