Hide Search
You are here: Home / The Latest With Chey / Imagining an Internet with No Chey 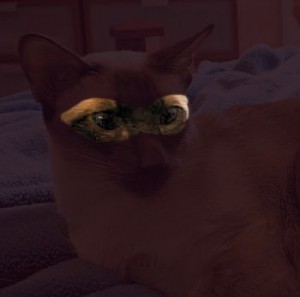 Several cats posted in protest on Wednesday.  Let me tell you why.

At this point a lovely author who wrote books about a race called the Cheysuli has never complained that I was named after her books.  If she did, I’d have the legal right to prove that this is my name and perhaps negotiate that I was only know as “Chey” rather than use my full name online.  Under SOPA, any one of her fans could complain that I was infringing copyright and my site could be pulled down.  It would be up to me to spend the money to prove my innocence.  Not a very American thing is it? But that’s what SOPA would do.

Further, if our friends across the Pond were accused of doing the same thing, if their websites were hosted in the United States the same thing would happen to them.  They are not residents of the country. They would be breaking no laws in their own country.  They would continue to live in their country but the United States would be telling them what they could and could not do.  Americans complained about the British and taxation without representation.  This would be censorship without representation or recourse.

Sparkle has some great links.  She was one of the cats who went dark in protest.  So did Max and the Hotties.  Other cats spoke out in protest about why this was important.  Now for those families who find all this political stuff boring, let me just nail the lid on my coffin if my legislators actually pass SOPA (I can get in trouble just for linking to these sites because they use material that could be considered copyrighted, although they give credit where credit is due) and give you this great Youtube Link about what could happen.  And if you need a visual, this one is important.

Imagine an Internet with no Chey!