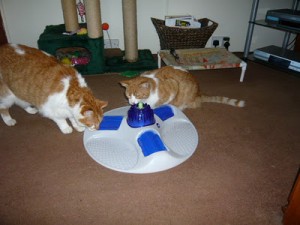 So several boy groups came by.  First Derby and Ducky came by and said, “Goodness, we are first again and we might have a clue. You are showing everyone how well you can climb the rock wall on one of the Royal Carribbean cruise ship. Can’t tell for sure which one just from this picture. You are doing a good job, nice stretches between the paw holds.”

Of course, that could mean anywhere because Royal Caribbean sails a lot of places.  Eric and Flynn came by and said, “Vancouver Canada” .  They came back to say, “Our mum thought it looked similar to one of the ports they stopped at on their Alaska cruise a few years ago. It’s certainly not any of the places on route so she thought it might be at the beginning Seattle which it wasn’t, or where they finished in Vancouver (Canada Place) BC.”

And yes, that was in the background.  So good for them! And it gets them a photo up on the blog! Woo Hoo!  I bet they couldn’t do it without Ducky and Derby!

Pixel and Samba were by checking out and trying to figure out exactly which ship it was, but alas we are not certain any longer (the Woman has NO memory!)  We think it was Radiance of the Seas.