Hide Search
You are here: Home / The Latest With Chey / Happy Holidays 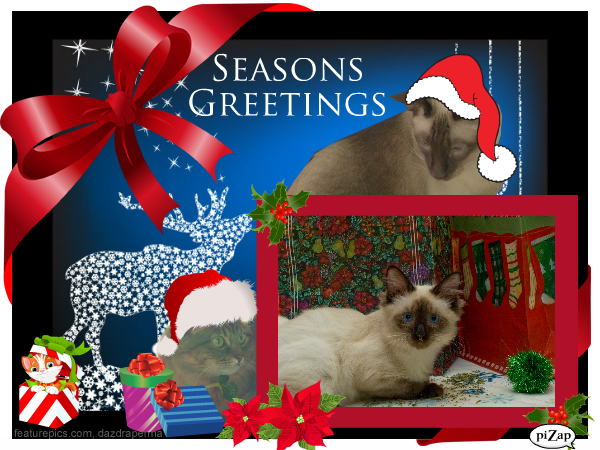 Season’s Greetings to All!

Hopefully after the holidays, things will have calmed down and my presents will be found and the Woman will blog for me again.

Oh and we had a kerfuffle with our Photoshop Elements.  I can’t believe the tech, the Male (a software build guy) and the Woman (a rather techno geek herself) did not think to reboot her computer as the first thing.  Anyway after much ado about nothing as now Elements works(post reboot), she was looking into other photo editing software. She’s got a trial of Corel, downloaded Picassa for their fantastic organization (which is so way better than Elements), and has Gimp (looses points for not opening RAW and she shoots in RAW).

What’s your favorite photo editor that we can give a try?  Oh, we were told about ACDsee too, but only the Pro version opens RAW files, and the cost difference seemed like a lot–not to mention Corel beat the pants off of them in reviews.  All her photos are on the Windows side of the machine, so although Aperture was tempting, she doesn’t want to convert back to the Mac side and leave all the accounting on the Windows side — it’s nice to be on one side and not constantly having to remember whether she last did that on the Mac side or the Windows side for things that run on both.  The next system will probably be a PC.  Anything in the Microsoft Store is so cheap (employee discounts ya know).