Hide Search
You are here: Home / The Latest With Chey / Diabetes Awareness Month 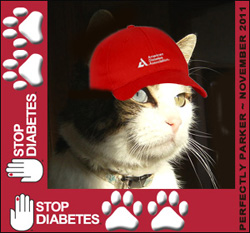 Parker’s family asked everyone to note that it is Diabetes Awareness Month.  To that end the Woman would like to write.

Chey is letting me post today because Cheysuli didn’t know my friend Mary Ellen as well.  Mary Ellen and Simone, my first Siamese were best friends. In fact, sometimes I wonder if they weren’t more bonded than Simone and I.  The first time I asked her to cat sit, I told her that Simone could get depressed and would get very lazy.  Mary Ellen made it her mission to annoy the heck out of her.  While cat sitting, Mary Ellen had a low blood sugar reaction.  Many diabetics are familiar with this.  They recognize the symptoms quickly and can eat something or drink some juice. Mary Ellen had had Type I diabetes since she was 11 years old.  For her, blood sugar reactions could sneak up on her and when we’d get her to drink and test her blood, the levels would hover around 22.  This is dangerously low.

Fortunately she was sitting on the sofa when she became aware that she was no longer thinking clearly.  When this happened she would often move very slowly and you’d have to guide her to do anything.  Answering questions could take three or four minutes.  Mary Ellen had juice in her purse sitting next to her.  She was struggling to get herself to drink the juice.  Later she told me that what she remembered so clearly was Simone sitting on her lap and staring at her as if insisting that she do something.  Simone sat on her lap and stared at her until she drank her juice.  It was like she knew there was something going on and she was pushing her own will to force this strange woman to drink up.  After having a juice,  Mary Ellen’s blood sugar slowly returned to normal ranges and she was able to continue on with her tasks.  Until the day Simone died, she had a special bond with my cat.

When I knew that Simone was dying and I was rushing her to the vet, I called Mary Ellen to let her know. She wasn’t answering but I left her a message about where I was going and how long I thought I’d be.  I told her if she wanted, to just ask for me at the vet.  I knew she’d want to say good-bye.  It wasn’t meant that she say good-bye to her very special friend though we talked within a few hours.  She’d been with patients that afternoon.

Mary Ellen and I met in acupuncture school sometime in 1996.  I remember talking to her about how she felt when in pathology our teacher talked about the hideousness of diabetes and that it was a death sentence.  It seemed such a harsh reminder when so many people lived a fairly long and productive life with the disease.  I was in student clinic and one of the students treating her after she had a stroke at the beginning of our third year.  She was in her late 40s.  After graduation, I opened a small practice on the other side of the river.  We stayed in touch and often went to lunch. As years went by, lunches became less frequent though we still often called and talked.  There was always something to talk about.  I often thought of her as my very special mirror.  We bonded through our own personal insecurities.  If I worried about something in myself, likely she did to.  Often in confessing things to each other, we could recognize the error of our ways because, you know, I do that too.

When I moved up to Seattle to be closer to Dennis, I missed Mary Ellen and her husband, also a very special man.  We talked on the phone but never as often as we once did. Still when we did talk, the talks were always deep and meaningful. This past summer I drove down to Portland for her husband’s sixtieth birthday. She had made a point of saying she’d love to have me and so I made a point of making it.  Dennis had a colonoscopy the next day so did not come down with me. Although I had no one to ride with me, it was important to celebrate Gary’s birthday. I am so glad I did.

Wednesday afternoon I found out that Mary Ellen died on Tuesday Nov. 1, 2011.  She was 57.  She had been on dialysis for a year, had congestive heart failure and suffered from an illness. She hated being on dialysis and as if to prove her right, her body had nothing but problems since she started.  She was in kidney failure as a result of long-term diabetes.  As a type I, her diet was good but she had had the disease for so long that even the best diet could not fight off the progressiveness of the disease.

Mary Ellen would not have wanted to be a poster child for her illness. I suppose she’s going to haunt me for a while for writing this now, but her story is a reminder that while we think of this disease as a chronic disease that people live with, it can shorten life.

Mary Ellen was not her disease. In fact, only those who knew her well saw the discrete stick at a mealtime or dealt with an unexpected blood sugar reaction.  She would have preferred to be known for exactly who she was–not too special, not too humble and with all warts visible.  It was this ability to be herself, honestly and without pity or worry that drew people to her.  Yes, she was a bit of a curmudgeon, but beneath that she carried a compassionate and tender heart. The nurses who had borne the brunt of her wrath at hospital routines and their dehumanization of the patient, called her husband to share their thoughts and how much they had liked her and would miss her.  Mary Ellen had an amazing ability to cut through all the superficiality of a situation and be completely honest.

I will miss her.