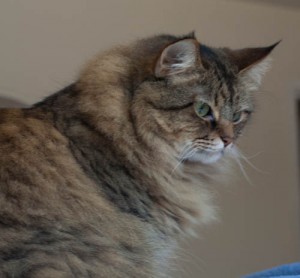 I think little brothers are difficult.  Ichiro stood and stared at me and made mean cat noises as I hissed back at him. Momma finally got mad and swatted him on the bum and he went away.   I get so tired of having to take him on to show him who is boss!

How do you cats with little brothers do it?  And will he ever grow up to understand that he doesn’t need to bother me?