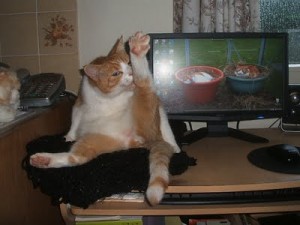 So I was found very quickly.  A few cats who have found me recently suspected my whereabouts and said they’d be back if no one else came to my rescue.  Eric and Flynn, however, all the way from ENGLAND knew where I was!   They said, “You are giving a speech as Edweard Muybridge which is at the Presidio of San Francisco, originally known as El Presidio Real de San Francisco, on the northern tip of the San Francisco peninsula. Edward Muybridge was an English photographer who spent most of his life in the US and is known for his work for pioneering animal locomotion for the film industry.”

And I believe they are right.  Cory invited me there to see some things her human saw.  How cool.

Many of our cat friends just did the Susan G. Komen three day walk for the Cure in San Francisco so I was pleased to be hanging there and thinking about them.  While we have heard that no everyone agrees with the Komen Foundation, last year when we looked into it, we were so thrilled with the gratitude we found on the part of women with breast cancer.  A friend of ours had breast cancer and no insurance.  She’s self employed.  Anyway, when she was trying to figure out her options, Susan G. Komen talked to her about the fact that her winter (it was) monthly income was low enough to qualify for Medicaid which allowed her to have the treatment and surgeries she needed.   Further, although the whole small town community got together with donations and a raffle and a silent auction and everyone donated and did what they could, our friend found herself short one month on her rent.   Not working will do that to a self employed person.  The Komen Foundation came through again and gave her a $500 check.     There are still walks in Atlanta coming up and the cat bloggers are going to be out in force–so if you can — help out!  Max and Jeter have folks walking and I think DKM is crewing again (or maybe walking–we’re not at all sure!)

Oh and some housekeeping–we’ve been in the process of considering the M word and it looks like it might be happening.  While we’ll do our best to keep Find Chey and Sunday Guest Star, you might wonder why we’re not visiting at our usual rate and that’s why! We’ll be back (hopefully before the holidays!)