Hide Search
You are here: Home / Meowism / The Book Of Ichiro, Chapter 1 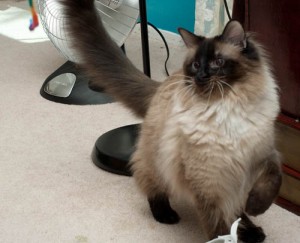 So I said to Cheysuli, why should I worship you?

And Chey said, “You don’t have to.  You’re a cat.  Pets don’t have to worship me.  They are too busy being worshipped by their owners.   I just want to be remembered as the one who reminds them to worship their pets.”

So I said, that’s cool.  So how come it’s like a religion?  Don’t you fight for souls or something?

And Chey said, “Well you know, lots of Gods do.   But Bast and I decided it’s not really what the humans believe but how they act.   We don’t want to get involved in all those human soul wars.  After all, what would we WANT with a bunch of human souls?!  No, we think they can keep their own beliefs so long as they are kind to those who are most vulnerable.”

So any way I still think that’s like way cool.   And all.  But I kind of like to fight so I asked about that and Chey told me that it’s okay to fight if I’m a cat because like that’s my nature and I’m not mad about stuff and things.   And it’s okay to defend myself if I like get attacked and stuff so I think that’s all cool too.

So have you signed up for the newsletter? Today is the last day for our contest to help Max’ person by getting money per newsletter sign up!   We’re lower than we thought on money so come on and help us.  We would cap at $50.00 but we’re nowhere near that.    Have a perfect fourth!   Fun but not too noisy!