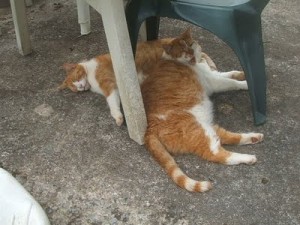 Well it was a hard one this week… It looked like Ayla, Iza and Marley might be the closest cats saying, “You are next to a very polite sign. It ends in “Thank You”.”  And then Brian suggested, “You must be down by the Old Mill Stream!”   Simba suggested Virginia and things started heating up.   Eric and Flynn were able to guess, “Is it Mabry Mill, Blue Ridge Parkway near Blacksburg Virginia?” and so they were.

I tried leaving clues around the blogosphere but I don’t think they were very helpful.

Simba, our geography teacher was great checking out this site, ” If anyone is interested in seeing lots of old mills, here is the site I found:

http://www.ohiobarns.com/othersites/mills/oldmills.html Mabry is there, but I gave up after looking thru all of Tennessee.”  Actually Simba, you guessed Virginia later on  and when I said you had the right state, that was the correct state!

Eric and Flynn also missed your Virginia guess but happened upon the right answer by, “It was pure luck! We googled “Mills and water wheels in Tennessee” (thanks Simba) and nothing looked right, then we happened to see a You Tube picture where the mill looked exactly right but the surroundings were different, so we googled that and got it from a different angle and decided that was it.”

And so I am found.  The Woman quite liked the geese in front of the mill.   They happened to find it while driving on the Blue Ridge Parkway after visiting Roanoke and were coming down to Mt. Airy North Carolina.