Hide Search
You are here: Home / The Latest With Chey / Mancat Meezer Monday 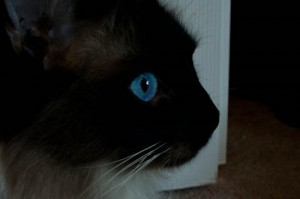 Well we had a visitor this weekend. That meant I did not get as much attention as I liked but I was a good cat, mostly.  Except that apparently that I woke up Gemini early and she started fussing at Mom before Mom wanted to get up.  I mean it was already 3 AM.   And then when Mom came to sleep on the sofa so that at least one person would get some sleep, I was chasing the other two.  I like to play chase.  It is the best at 5 AM.  But because of that Mom had a weird dream and now Cheysuli will have a column at Mousebreath too… I don’t know if that’s a good thing. I was feeling special.

Mom says that I am probably about a year old now.   She doesn’t know if I she wants to give me a birthdate because she forgets things like that.  Maybe it’s a good thing.   She hasn’t talked about a party either.   I want one.  We can all chase each other and take turns sitting on Cheysuli’s head.