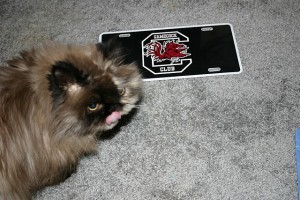 And she was correct!

The Florida Furrkids also got it correct.

I had no idea how many times this same statue was around.   But it seemed appropriate for an April Fool’s Find Chey, don’t you think?   I bet it would have been easier if it had been raining.   That was an unusually nice day there in Kirkland.